NVIDIA at E3 2013: PC as the Best Gaming Experience


The Electronic Entertainment Expo (E3) may be best known for its launches and announcements of the latest console games, E3 2013 was the most controversial, competitive, and downright crazy show we have seen in the recent history of gaming. nVIDIA® did some well-deserved strutting at E3, showing off the superiority of the PC as a gaming platform. 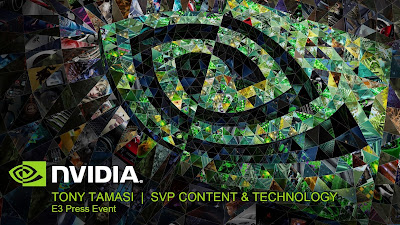 The massive nVIDIA® booth at the South Hall of the Los Angeles Convention Center was the perfect opportunity for nVIDIA to demo several new upcoming and current PC titles running on the latest GeForce GTX 770 and GTX 780 GPUs, such as The Witcher 3, Warframe, Borderlands 2: Tiny Tina’s Assault on Dragon Keep, Metro Last Light, and Splinter Cell Blacklist. Visitors to the nVIDIA booth at E3 2013 were delighted at being able to play graphically-stunning PC games in their hands.

nVIDIA’s E3 media event started at the end of a very, very long day. Relaxing was the first order of business, but it may come as a surprise to hear that not only were the attendees relaxing, but so were many of the presenters. Representatives ranging from Digital Extremes to Epic Games took the stage and had fun showing off the tech they’ve built in partnership with nVIDIA. It was the perfect atmosphere for showing off nVIDIA’s impressive tech and why PCs will continue pushing gaming forward dragging consoles behind.

After Tony started off the event he went straight into nVIDIA’s current property on gaming’s landscape. Specifically, PC, console gaming, and ventures like cloud gaming and their new Shield handheld: 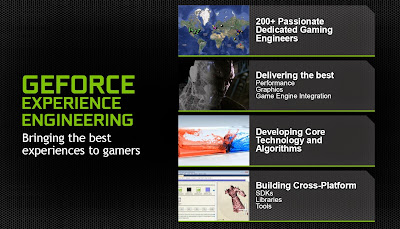 nVIDIA got over 200+ engineers working to deliver the best performance, graphics and game engine integration available. Part of that is developing core technology and algorithms, but also cross-platform SDKs, libraries, and tools.

That includes the company’s three global testing facilities, with the primary facility located in Moscow. Testing engineers are constantly working to improve gaming performance on nVIDIA devices, running performance tests and building an assortment of tools. It’s no way to play a game, constantly focusing on improving performance in minute ways, but their sacrifice is for the greater good.

Then Tony went ahead and listed nVIDIA’s entire innovaive tech that they’ve built over the past 14 years, from texture-space bump mapping to global illumination. Basically, nVIDIA’s huge driving force behind new graphics tech and the’yre not stopping any time soon.

This introduction was just a buildup so nVIDIA could remind why they’re the leading GPU manufacturer out there. According to non-nVIDIA sources, nVIDIA is currently running 66% market shares as of Q1 2013 and that’s because of the huge technology adoption across a majority of games - even higher adoption rate in highly rated games. nVIDIA wants great games to run well and they go out of their way to make it happen.

nVIDIA confirms that they’re working on game integration with all of the usual suspects: Cry Engine 3, Unity, Unreal Engine 4, Frostbite, Source, and idTech 5. Considering next-gen consoles are finally joining the 1000+ GFLOPS GPU club that nVIDIA’s been part of since 2009, the engines will have to do some work catching everyone up. Oh, and nVIDIA is stretching for 5000+ before too long. 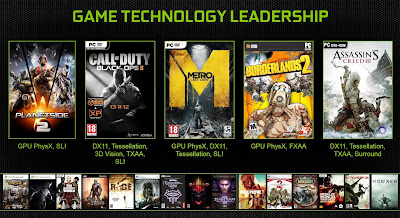 nVIDIA wants nothing more than to work with developers to make their games better. It’s a hugely beneficial relationship between game developers and nVIDIA, but the real winners are gamers. Luckily, most developers and probably most folk at nVIDIA are gamers too.